During any Fall season with the weather changes, you have to take good riding days when they appear. So with just a day of planning, I decided to take an overnight ride over the North Cascades Highway (SR20) on Saturday morning, October 4th, 2014 here in Washington State. I've been meaning to for years, but never got around to it. I was originally going to try a 3 or 4 day trip over to the coast by way of SR20 with my brother Dave. But with such short notice it'd be best for me to do this solo. So I packed up the tent, etc. and hit the road in the morning.

I decided before I started that I'd take pictures on the way back. The ride west would be for the ride's sake. To make it really the scenic route, I took off from Spokane to Hunters on SR25, took the Gifford Ferry to Inchellium.

I always like taking the ferry. It's peaceful on the water and is a nice reason for pausing. Today it was more peaceful than normal as I was the only one on the ferry. Riding off the ferry I headed north to SR20. I rode across Sherman Pass which was a little chilly at about 5500 feet, then through Republic and kept heading west until I hit Hwy 97 and Tonasket. Turning south on 97 I stopped in Omak for lunch, then back on to SR20 to cross the Cascades. The route really is everything everyone says it is. Firs, aspens, evergreens, all against the backdrop of the ragged Cascade Mountains. Winthrop is a well-known Washington town on the highway. 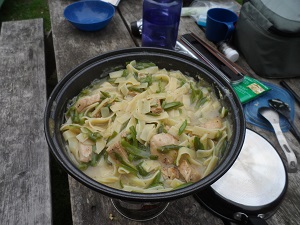 I'd never been through it before. It's sort of a western-themed version of Leavenworth, Washington with lots of tourists. Saturday seemed to be BMW and Audi car day. They were parked all over the place. Anyways, you do a lot of up and down on the highway but eventually started heading more down the nearer you get to Diablo Lake. That was also as beautiful as I was hoping.

Especially since the highway gives you a birds eye view. I eventually passed through the town of Concrete which is near where I planned to camp. I ended up in the KOA because the price was the same as Rasar State Park and had better facilities. I got my tent set up and started working on dinner which I had mostly prepped the night before. A bit of chicken and green beans mixed with some pasta. Tasted great after a great day's riding. The day's mileage: 379 miles.