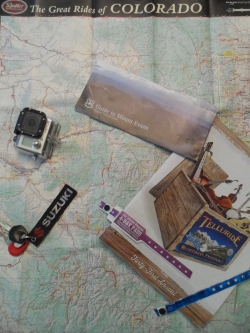 Wow, where do I begin? This trip is the best one I've been on yet. The short version is that from June 13-28, 2014 I rode with Bill Motsenbocker and Dan Schneider to Telluride Colorado for a four day bluegrass music festival, then rode home. But that factual statement doesn't even begin to tell the story!

It all began a year ago when Bill mentioned to me one day on a day trip that he'd like to go to the Telluride Bluegrass Festival in 2014. Bluegrass! I've always loved that type of music, but hadn't really listened to much since the Coen brother's film "Oh Brother, Where Art Thou?" I was entranced by Dan Tyminski's rendition of "I am a Man of Constant Sorrow", the haunting voice of Allison Krauss on "Down to the River to Pray", and much more from that movie. So when Bill suggested that, I immediately said "count me in!" From then on I started to immerse myself in bluegrass music and realized both how much I had missed that type of happy music and how many new versions there were. Lots of new artists are taking the genre in new directions, most of which I love.

Anyways, fast-forward to December 6th, 2013. Bill had warned me that when tickets go on sale that day, you'd better be johnny-on-the-spot about purchasing them. So promptly at 7am pacific I went to the site to get the four-day pass and camping reservation. It took ten minutes with the traffic, but I got it. Bill was also able to get the same for him and Dan. It's a good thing we got them then, because in less than two hours ALL four-day passes were sold. Single passes for Friday and Saturday sold out shortly after that. Pretty amazing! We were set, but had to wait another six months before that trip would be realized.

Finally, it's a week before the trip and we're finalizing general trajectories and packing for the two weeks. This would be the longest contiguous time off I'd ever taken as well as the longest riding I would have ever done. Silly me, I thought it'd be a bit over 3000 miles. More on that later. I decided initially that I would do the freeze-dried food for the trip so I bought about 6 days worth of food prior to leaving. The food is light and only needs boiled water to have a dinner. From previous trips I have learned a few things about what works and what doesn't so I felt pretty confident about what I was packing. The only unknown was how well my sleeping back would work in low temps with a fleece liner in it for added warmth. That ended up being my only poor packing decision. I had placed a new chain on a week earlier, and a month before that replaced my worn out rear Michelin PR3 with a new tire of the same kind. The bike was clean, serviced, packed, and ready to go.