So here is a different trip report from the others on my website. While I rode my bike up to Nakusp and back, the point was attending the 2013 Horizons Unlimited Traveler's Meeting. This is three days of riders from North America and a few from around the world gathering to talk about their trips, what they learned, and how you might be able to improve your own trips. It was a great 3 days and I will definitely go again! 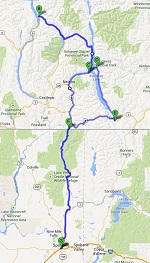 One thing that Grant Johnson, the founder of HU told me was that while there was plenty of room for people to camp, it's first-come, first-served. So I left Spokane at 7am and rode non-stop to the Canadian border at Nelway. It was quite cool, so I put my rain gear over my mesh gear to act as a windbreaker during the cool morning. After crossing the border I rode on through Nelson and along the West Arm of Kootenay Lake, always a pretty ride. At 10:30am it was finally warm enough to shed the rain gear, which I did stopping at Kootenay Creek Provincial Park. I continued on up to Kaslo, then turned left on the always enjoyable 31A. This highway is about 45 kilometers (approx 28 miles) of smooth tarmac that weaves through the mountains past several small lakes and mountain streams. On the day that went through, the road was nearly deserted giving me unparalleled riding fun! I saw 4 or 5 other motorcycles on the road and came up against one care as I neared New Denver at the end of the road. From there I continued on into Nakusp and found myself a campsite and then walked into town for a late lunch. Nakusp is a pretty little town on the banks of Upper Arrow Lake, surrounded by mountains with a hot springs not far away. It's worth a visit if you're heading north. I reached Nakusp about 12:15pm which was pretty good time. When you're riding solo you can set whatever pace you want and don't have to worry about other's opinions. I begin to see the advantages of solo travel.