This was a pretty good four days of riding, except for the heat. Which was hellacious. We're talking melt-your-face-off hot. But hey, I'm all about being an adventure rider, so I laugh in the face of too much temperature. HA!!

This was a CMA Fastlane event put on by the westside Washington State group and organized by Rob Newman. Rob is the guy that just can't decide what bike to own. Every time I see him (which, admittedly isn't often) he has a new bike. This time it was a Tiger 800, which put me in a jealous mood since I lust after one. But I digress. Rob did an absolutely bang-up job of preparing for the rally. He and others went out for pre-rides, both dirt and pavement, supplying GPS files for those interested in ready-to-ride routes. So even before I left town, I had the routes in my Garmin and I would be ready to ride when I got there. Nice job, Rob! 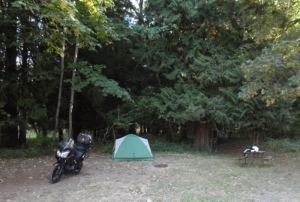 The event was held at the Cascade Peaks campground smack-dab between Packwood and Randle, Washington. The campground was pretty big and had the necessary amenities. I think my impression would have been better in cooler weather, but I can't really say it was a bad place. Two pools, a little store with some emergency groceries, bathrooms & showers close by, and plenty of room to set up my little tent.

I took off from Spokane at about 2:30pm Thursday for the long and boring ride west. The reason for "long and boring" was that I wanted to arrive in daylight, so that necessitated taking the dreaded slab (I-90) to Ellensburg, then dropping down to Yakima before heading west again through White Pass to get to the campground. I had hoped to listen to an audio book, but the wind noise was too much, so I switched to music for the trip. I made pretty good time and with a half-hour stop at Taco del Mar in Ellensburg, I arrived at the campground just five minutes shy of eight o'clock. Did I mention it was hot? All I was looking forward to was a nice shower when I got there. I found my friends Greg Nolan, Grant Collins, and Roger & Peggy Zaring with two toy-hauler trailers, so I camped more or less between them. This worked out well for me because since they would all be sleeping indoors, there was nobody to complain about my snoring! So once I had camp set up I took off after that shower I had been looking forward to and eventually settled in for a much deserved night's rest.