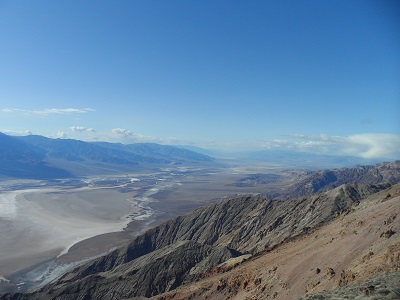 Death Valley! The very name conjures up visions of sand, heat, mirages, and desolate vistas. My brother Dave and I had talked about going there now and again, but hadn't really made any plans. But in the fall of 2014 we started thinking more seriously about it. But how to do it? Ride down there and back or trailer the bikes? I happened to chat with a friend of mine from Colfax, Roger Zaring, who told me that he and another friend Greg Nolan had tried to get down there the previous two years, but schedules always got fouled up. But they were going to try again in 2015. So that made four of us. Time to start planning.

Dave and I did a lot of reading up on Death Valley both for where to go and what precautions we should be thinking about. It is a desolate place and it's easy to forget that if you break down while out riding, you could be stuck miles from anywhere. We made sure we had good first-aid kits and bought hydration backpacks to ride with. I bought maps from Tom Harrison maps for myself and a couple other guys, which proved invaluable while down there. Advice from ADVrider.com and other adventure blogs came up with that suggestion and several others.

Rob Newman from the wet side of the state created a private Facebook page for us to pass ideas around which really turned out to be helpful. We coordinated things and decided on camping at Stovepipe Wells, which is pretty much dead center in the park.

This trip marks a change in the type of motorcycle trips I've taken in two major ways. 1. It's a dirt bike ride, and 2, we're camping in one place for the week and riding from there every day. Having sold my old Honda XL250R last year, I would be riding my 2008 Suzuki Vstrom 650.

So I needed to "dirt" it up. This consisted of doing the following: