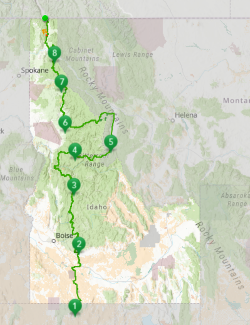 This is a trip I'd been hoping to do ever since I did the WABDR back in 2017. It's twice as long, but generally easier – that's what I had been reading online. Tim, Dave, and I would be riding again and initially Bill Motsenbocker was going to go with us, but schedules didn't mesh and he ended up not going. So it was the three amigos riding again! The route begins in Jarbidge, Nevada so the logistics of that seemed pretty daunting since that little town is miles from anywhere. We had all watched the official IDBDR video and saw that the first 100 miles is just flat, straight gravel roads through scrub country. So we decided to make the trip easier and just ignore that first bit. Turns out a lot of people do the same. We rented a U-Haul truck one way from Spokane to Mountain Home and stayed our first night in the Hampton Inn right along the highway we needed to take to get to the route. 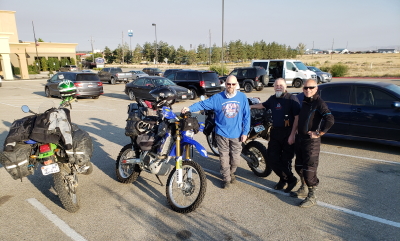 The drive down was long, but fine, the bikes riding in the back with no problems. We used ratchet straps and just left them in Mountain Home for someone to use. We stopped in Pendleton for lunch at Subway and then arrived at the hotel around 4 or 5pm. We had checked into the hotel and were getting our stuff out of the truck when a couple that we had seen on the IDBDR Facebook page walked up to us. Glenn and Janet are from North Carolina (she's from New York originally) and are a delightful couple. Both riding KTMs (790 Adventure for him, and a 500 EXC for her) we had dinner together at Winger's which was across the street from the hotel. We swapped stories and plans for the trip and knew we'd see each other off and on for the next week. We left the bikes in the truck because it was a nice secure place to leave them and our gear overnight.

For those wondering, Dave and I are each riding a Yamaha WR250R, and Tim
is riding a Kawasaki KLX250. We are firm believers in "Light Is Right".