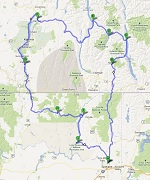 Saturday, 9/29/2012
As I mentioned on the last trip report over Labor Day, my brother Dave was pretty bummed about not being able to make that trip so I told him we'd do another. Well, Dave's wife Rina really likes the Tylenol with codine that you can purchase over the counter up there, so I planned a mission of mercy to bring that down to her. Can't say my arm was being twisted very hard, mind you, but she did actually ask. I decided to more or less replicate the Labor Day route but use hotels instead of camping. I'd rather camp, but I think others would rather do it the soft way. This trip will consist of me, my brother Dave Clark, brother-in-law Jay Moen, and Grant Collins.

Our route this time takes us straight north out of Spokane and we planned to meet at my house at noon. Nelson isn't too far from Spokane so an afternoon ride will be just fine. Dave was determined to not be late. He was going to be there on time or early come hell or high water. Well maybe next time. Grant and Jay both got here before him and so bragging rights were not his this time. Still after the requisite gab session we pretty much got off on time and headed north on Highway 2, staying north by turning left on to route 20 which follows the Pend O'Reille River.

We made a short stop at Riverview Bible Camp to take a look at the new underground tunnel they finished this year. It allows their campers to cross the highway in safety. All of us have spent a significant portion of our youth up here and changes like this are great for the campground.

Getting back on the road we continued north until we got to Metaline Falls which is a great little town where it seems everytime I go through, there's some event happening. This time was no exception. They had a classic car show going so we parked the bikes and wandered the streets as we headed to a place to find lunch. Lots of cool stuff to look at, but we needed to get lunch taken care of and get back on the road. (Why are there no pictures? - Because we're a bunch of putzes short on brain cells)

The rest of the trip up to Nelson was uneventful and for me, very familiar having taken this road several times in the past couple years. We eventually got to Nelson and motored on over the the New Grand Hotel. We stayed in this hotel last summer (see Jasper-Banff, BC 2011) and decided to try it again. We very nearly got the same rooms. After unpacking and cleaning up a bit, we decided to take a walk around town. It's a quaint little town and a bit of a hippy kind of place. Reminds Grant of some places in California that cater to the 60's crowd. We were thinking of finding some different place to eat, but we ended up back in our Hotel after hearing from some locals that it's a pretty good place to eat. It turned out that they were right - it was a good dinner we had. After razzing the waitress a bunch we eventually decided it was time to turn in, so we headed off to our rooms for some sleep.