Of course the trip couldn't start on time. My brother Dave and I were to meet Bill Motsenbocker at 2pm on Friday. For Dave this would be his first trip on his 2008 V-Strom 650, a virtual twin to my bike. Now, since Dave has a reputation for being late (undeserved, I'm sure) he was determined to be on time. But two things conspired to make him late. First, the car transporter company that is taking his 1969 Dodge Charger to California (to our nephew Aaron) called and said they were coming that day. So Dave had to rush home and make sure everything was ready to go. Secondly, he ran out of gas right when he met me. So I had to go get him some gas so he could get to the gas station to fill up. Needless to say I called Bill and told him that we were not going to make 2pm. We finally did get going and decided that maybe we could catch up with them by taking the boring highway 195 - we were probably 45 minutes behind them. 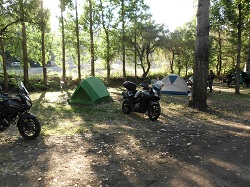 We stopped in Colfax to stretch our legs then went nonstop (to Lewiston, then on Hwy 12 through Orofino to Kamiah) to the campground arriving about 6pm just 15 minutes or so before Bill and his group. 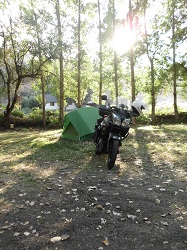 We parked our bikes where we were going to pitch our tents and then went to the restaurant for a great prime rib dinner. After that was setting up camp, meeting new people, and figuring out where we would ride the next day.

Saturday, September 24, 2011
After slowly getting up and taking a shower, Dave and I were too late for the morning devotional (heathens, that's us). But we had breakfast with everyone and over breakfast decided to take the southern route that Steve Schiller had prepared for everyone (thanks Steve!). The other two routes were taking the road to Lolo Pass and back, or a northern loop out through Pierce, Hollywood, Kendrick, Clarkston, Winchester, etc. Our route was basicially south to route 14 to Elk City, then through Grangeville to White Bird Pass and back. We took off around 9am and made our way down to to Route 14 and what a great road it was. The only thin marring the road were occasional patches to the road that had not been properly swept.