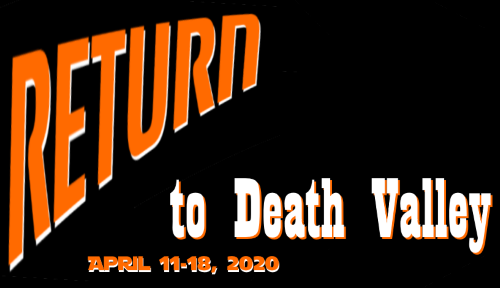 Well, it's finally happening. After a couple of false starts the last two years we're heading back to Death Valley for another epic week of riding this spring. If you review my last trip (Death Valley 2015) you'll see we had a lot of fun. Death Valley is an amazing place and even in early March we had great weather. This time we're going a month later so I'm expecting warmer temperatures at least in the lower elevations. I won't be surpised by any snow still in the higher places though. With peaks at 11k feet you get a whole range of temperatures.

There will be places we'll want to go to again. Titus Canyon will be first on our list. It's an easy morning ride and the canyon is just awesome to ride through. Same is true of Aguereberry Point and the Racetrack Playa. The racetrack is just one of the coolest places I've been to. However, I'd like to approach it from the west if the group is game. Might even return via Lippencott Road. I've seen videos that show me it's not nearly as bad as I've heard. Certainly though weather can change the road from mildly rough to expert-only-gnarly from season to season. Another ride I wouldn't mind retracing is riding to Darwin via Darwin Falls. We never saw the falls last time, but I'd love to ride there. It was another easy ride. New places? Oh yeah. Eureka Dunes which Dave and I tried to get to last time but ran out of daylight. The canyons near Ballarat, Amargosa Dunes, Saline Valley, and many more places. 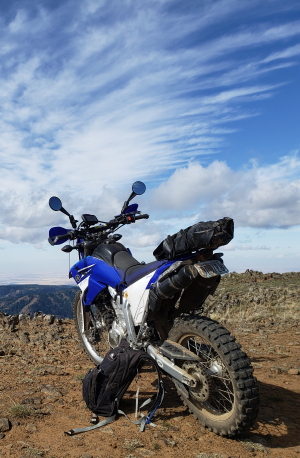 One difference from last time is that instead of a 480 pound Suzuki V-Strom, I'll be riding a 300 pound Yamaha WR250R which is made for the dirt. My fun-level should be WAY higher than last time. I bought it in 2016 (Yamaha WR250R) and have improved my dirt-riding skills by quite a bit. I wouldn't qualify myself as an expert, but a solid intermediate with decent skills. At 61 years of age, I've also learned not to pretend I'm 25. With age comes wisdom - sometimes. Still, some of the places you can go in the park are pretty rough, so having a more capable bike is going to be a joy.

The remaining question now is who will be going? My brother Dave will be going along with his son Aidan who is in his senior year of high school. My friend Tim Pontius who I've known and ridden with for years. A new friend Jeff Lawton from down in the Palouse will be joining us. I have the word out to the rest of the bunch down there who went with us last time and some that didn't, so we'll see who can make it. We don't always ride in one big group because that can be a pain sometimes, but camping together makes for really fun evenings.

So it's six months away, but I'm already getting really pumped to go. It's going to be a great trip!