A few weeks ago I watched the Ken Burns documentary "The Vietnam War". It was extremely good. I lived through this period of history, but was too young, thankfully, to go to war. I learned a lot that I didn't know because I was too young in the sixties to understand. I knew that our next-door neighbor was a prisoner of war but as they didn't have any children my age, it as somewhat academic to me. I just didn't know what that meant. I enjoy history, as I've probably said here before, because we often can't have any idea where we're going unless we understand where we came from. Or what came before us. I would recommend everyone to watch it. Yes, it's brutal. Yes, it can make you angry with the utter waste of war, lies from our government, and the reactions of our country's citizens. But ignoring mistakes is the first step to repeating them. 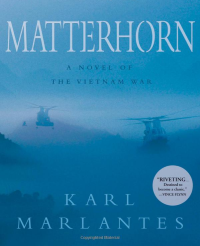 They interviewed many people in government, in the military, and general citizens effected in different ways. It's interesting to see their viewpoints now, decades later, to see how they've grown and gained wisdom from the folly of youth. One such person is Karl Marlantes. He appears throughout the series and for me was especially intriguing. He was a Marine Second Lieutenant during the war and had on-point opinions having been there in the thick of things. I noticed that at the end credits he was listed as being an author so I looked him up. He wrote two books: a novel called "Matterhorn" based on his combat experiences, and "What It Is Like To Go To War", a non-fiction book that coalesces what he has learned about war and the human beings that participate. Like the documentary, I highly recommend both. 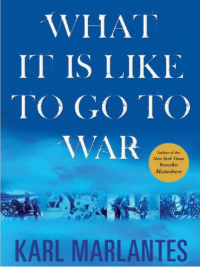 I read the novel first. It was a brutal, no-holds-barred story of a young officer near the DMZ in some of the most frightening combat situations. For me it is the best book I've read to give me an inkling of what it was like to be there. I'm still reading his other book. As I read it I realize just how many of his experiences are in the novel. He's really describing himself - his own actions - with names and locations slightly changed to allow a certain distance to the story and also (probably) to allow some anonymity for his fellow veterans. A young reserve Marine Second Lieutenant I know told me that the non-fiction book is required reading for officers. And no wonder. Listen to some of the chapter titles: Killing, Guilt, Numbness & Violence, The Enemy Within, Lying, Loyalty. And there's more. But what makes this book so good is that Marlantes does not shy away from his failures in making a point and using what happened to him as examples. It gives me a new appreciation for what we're asking of our young men and women who join the armed forces. Why they become different. Why we'll never truly be able to understand. That doesn't mean we don't try, but we have to give up on our stupid reaction by giving them meaningless platitudes. As I saw in a recent article this past Veterans Day, "Thank you for your service" or "Thank you for killing for me." Let's understand what happens to our warriors.

Anyways, the other thing I find very interesting about the book is that his conclusions and statements echo not just to the current and future veterans, but to us civilians as well. What is incredibly pointed and relevant is his term "pseudospeciation" which he describes as a "dissociation of one's enemy from humanity". "You make a false species out of the other human and therefore make it easier to kill him." Now he's talking about war, but we do it every day in our culture. We see it in the news by politicians, celebrities, and on all forms of social media. We use a name, usually pejorative, to describe the other side - you know, those who you don't agree with. They're not human beings, their fascists, libtards, neo-cons, progressives, etc ad nauseum. We take their humanity away and reduce them to a one-dimensional thing. So we can hate them and feel good about ourselves. Though I'm sure Karl Marlantes didn't intend this, I find his conclusions and opinions echo what I read in the Bible. We, humanity, are all the same. No better or worse than another in God's eyes. His point of view trumps our picayune view of ourselves.

Being the cynic that I am, I don't believe our country has enough maturity and wisdom to walk back from the brink that we seem to be headed toward (whatever that may be). But I think God is calling us to step up and be better than we are. Those of us who count Christ as our Savior should be recognizing the humanity of those who oppose us. As Obi-wan says "don't give in to hate" - I know, not exactly biblical, but God's word does tell us to love our enemies. So I'm not going to participate in that kind of tearing down of other people just because I disagree with them. Yelling at them and calling them names is not going to convince them of anything other than I'm being an idiot. Maybe I'll give God's way a chance.

Perhaps you could too?