As with the rest of the United States, I've been watching this slow-motion trainwreck of an election year and wondering how an entire nation can lose its collective mind. Here we have two of the worst candidates for president ever put before the American public and for months we've all thought "it can't get worse than this." But oh yes, it can. And it has. I won't put down all the reasons both candidates of our two major parties are despicable and why I won't vote for either. I also won't quote several commentators whom I respect who have put their reasons down far more eloquently than I could. No, what I'm here to say today is that in the end, we may have to thank Donald Trump for what he's done for American Politics. 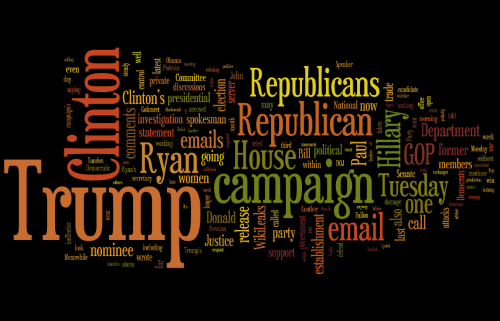 Turning the soil
Farmers turn the soil upside down for many reasons, but in general the point of it is to improve the ground for future planting. Weeds are exposed so they can die. Manure is added and though it stinks, it'll help future growth. Insects and other pests are either exposed to die in the light or smothered to die in the dirt. What we're seeing today is no less than the soil of our political system being turned over. To say that the Republican party will no longer be the same is a bit of an obvious statement. People have for decades complained of our limited two-party system and wished for change. As the saying goes, be careful what you wish for. I don't think the Democratic party will remain unscathed either. It may not happen right away, but I believe we will see that looking back on this year, our two-party system collapsed under its own irrelevance and something new developed.

The new crop
But what will emerge in the "spring?" A split GOP? The rise of the Libertarians? I have no idea and am not going to try and guess. I'm also not going to pretend to be optimistic about our country's future. The vibrancy, optimism, and ingenuity of the past is long gone in a post-ethical, post-moral morass of liberal humanism that has been enveloping our nation for many years. Our country is on the highway to world irrelevance and our future president, Hillary Clinton, will only be "stepping on the gas."

How then shall we live?
There's a very good reason that our part of the world is not mentioned in biblical texts when predicting end times. It's because we're not relevant to that future event. It's a hard thing to accept but as some of us that are Christians can see, our moment in the sun is over. Being faithful and obedient to scripture has never been more relevant however. And we can still be a light in the darkness.