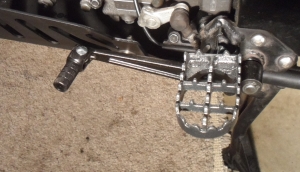 Here's a little update on my preparations for the Death Valley Trip in March. I've pretty much done all that I said I was going to do. The skid plate is on. I took the bracket with the slight crack to Bill's Heli-Arc here in Spokane and he fixed it right up. A little paint and then I put it on the bike.

Next was the shifter. I was all set to buy the Studebaker folding shifter from vstroma.com, but my brother Dave came to the rescue again. I don't recall how, but he came across some place that had a number of them selling for $35 shipped. So he bought three of them - one for me, for him, and our friend Grant Collins. That ended up being really easy to install. The trick was knowing that in the linkage between the shifter and the transmission was an odd little bolt with two different sized threaded ends. Take the circlip off the mounting shaft, slip the old shifter off, then loosen that end of the odd little bolt and spin the shifter off. Reverse the process for the new one and poof, it's done. It really is much stronger than the stock one. When I did the shifter I also swapped my stock rubber-topped footpegs for my new offroad ones. 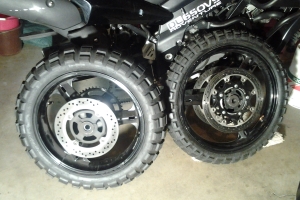 Next was the tires. That was a matter of just taking the wheels off and dropping them and the tires off at Sprocket Sports, a new bike shop on the north side of town not too far from where I live. Got them back and the wheels put back on the bike. Man just that alone makes the bike look gnarly!

One other thing that I had planned on doing at some point was to change the "cigarette lighter" style of 12 volt socket for something more secure. BMWs have as their standard socket a very secure connector/socket. PowerLet sells the exact same type of connection devices so I ordered a socket, plug, and dual USB plug. The socket replaced my existing socket without any wiring which was a nice surprise. The plug was something I wired up to power my Garmin GPS. The dual USB plug is so I can charge two different USB devices. The reason I did all this now is that when on a dirt or rocky road there's no way that anything will stay in the old style plug. I'll want to keep my cameras and phone charged while riding.

The last thing I'll be doing on the bike is installing some hard handguards that I have on order from Maier Manufacturing. Those will be to protect my clutch and front brake levers in the case where I drop the bike. If the information I have is correct, I will be able to keep them on the bike even with my Kaoko throttle lock. I didn't buy the plastic windguards for them at this point because I don't need them for this trip. I'll pick them up later this spring.

I swapped my taller windshield for a shorty that my brother Dave had made.  I'll soften up the pre-load on the rear shock when I get down there and adjust tire pressure as necessary down there too. That'll be it for the bike prep. So for now the bike looks like this: 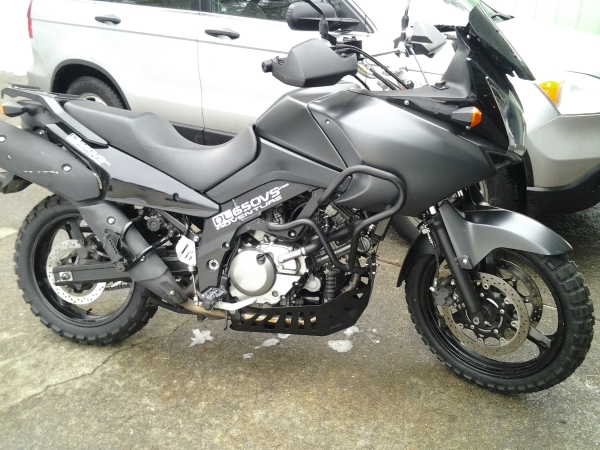