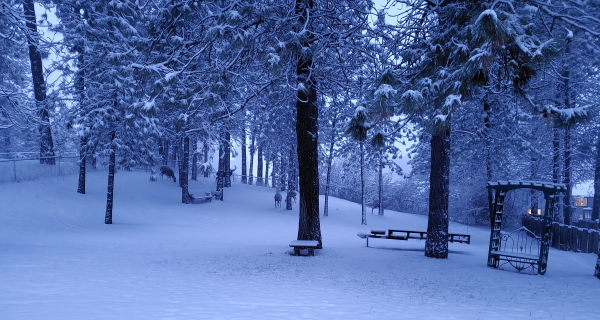 What am I reading now, you wonder? Well, nice of you to ask. It's winter so of course I'm longing to be riding my motorcycles. It's currently snowing to beat the band and will likely reach at least a foot on the ground in two or three days, so it's a great time to be reading. 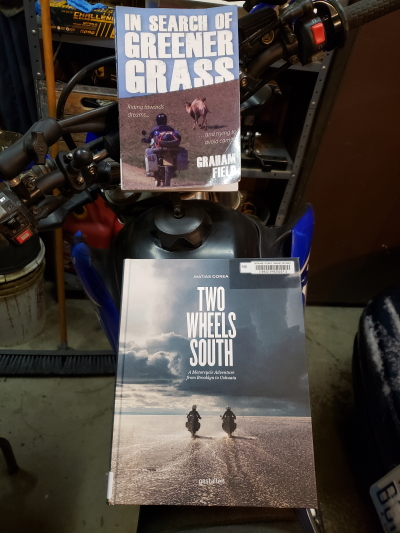 Every now and again, I'll come across some recommendation for a book and I'll submit it to the Spokane County Library to buy and sometimes they agree. If they can't borrow it from another library they'll buy it and put it into their circulation. That was the case for the book I just finished, "Two Wheels South" by Matias Corea. Matias is a native of Barcelona, Spain, but currently lives in Brooklyn, New York. He's a graphic designer and photographer, and in my opinion, a bit of a poet. The book is full of wonderful images from the USA all the way down to Ushuaia. He and his best friend Joel rode down on two mid-eighties vintage BMWs and had, as you would expect, an amazing adventure traveling 20,000 miles over six months. He has a nice section at the start on his preparations including pictures of what he took. But the narrative is more lyrical reminiscing than telling of a story. Between his photography and prose you really get a feel for their trip. For such a large looking book, it can be read quickly though you'll want to linger over the pictures. I can highly recommend this.

The second book is one I'm just starting. I can tell already it's going to be as different from "Two Wheels South" as it can be. "In Search Of Greener Grass" by Graham Field is snarky and irreverent from the get-go, letting me know this is going to be a fun read. With few pictures (not printed very well) this book will be all about storytelling. From the jacket and introduction he's on a solo ride from England to Mongolia, but the map shows him getting to South Korea. With where he's traveled this too will be an epic read. I can't wait!

In other news, I've decided to join the ranks of the YouTubers. If you've read anything on my site, you'll notice links now and then to videos I've created and published on Vimeo. Mostly I've made them as private DVDs for myself and those I've ridden with. But it gets difficult when someone would like to see some of these and I don't have them published. Mostly it's because of both the size of the videos and the fact that I have copyrighted music on it. So I'm going to switch things up and publish on YouTube. There isn't the size limit that Vimeo has, though there's a 15 minute limit on each video. This shouldn't be a problem as most people publish their trips as different chapters. I've created a channel called "Old Tom Rides" and will be pushing videos up as I get them created. I'll probably put some of the older stuff too once I figure out if I can get away with the music I've used. I'm under no illusions that anyone other than my friends will watch them, so I'm not going to be making money off of any of this. But it'll be a fun way to distribute things. I like making the videos, amatuer that I am, so I'm just posting them for the fun of it.