My wife and I took a two week vacation in Germany this past month to visit our daughter Amy who lives there. It was my first time off the North American continent and I was really looking forward to it. The flight over and back was not that much fun, as we aren't in the income bracket that allows for first class travel. The flight over was a three movie flight and the return was a four movie flight. At least that's how I spent the time. But we eventually arrived in Dresden, picked up our rental car, a Ford C-Max with a six speed manual tranny, and headed out on the autobahn for the first time.

The Autobahn
First of all, thank goodness for Sat-Nav (that's Satellite Navigation or GPS to the rest of us North Americans)! We got out of town and from there headed east on A6 - this was it! My first experience on the famous autobahn. Something I had read and heard about for years. I'm not sure what my expectations were, but you know something? It looks the same as our US freeways except with different speed limits (like none in many places) - not really exotic. Besides that, there were two main differences that I could see. First, it was clean. Germans keep their roadways clean and in good condition. No trash all over the place like here in America. More like Canada in that aspect. The other difference is that German drivers are good. I mean really good. The left lane is for overtaking (passing) not loitering and you better believe you shouldn't loiter there on the unlimited speed areas. I have the cruise control at 145 kph (90 mph) and checking my side and rear view mirrors constantly. Why? Because even at 90 mph, a Mercedes, Audi, or BMW going closer to 140 mph (plus) can sneak up on you amazingly quick. Most every time one of these would pass me that fast I'd get a little giggle in my head ("dude, that was awesome!"). One more thing about the autobahn - cars can bunch up in the left lane when trying to pass a slower car. At 90 mph. Really close. Like tailgating close. I never got comfortable doing that. I did it, but I didn't really like it. Still, I love to drive fast and so driving in Germany was fun.

Roundabouts
Okay, let's talk about the elephant in the room. It's round with no lights and most Americans hate them. They think they're stupid, unsafe, and probably slower. Well, they're wrong. Done right, traffic circles (roundabouts) are incredibly efficient and very safe. I always thought I knew how to use them properly and I was pleased to see I was right. Germans (and probably all Europeans I'd guess) expect you to not stop and merge right in. If there's a gap that's a car length, you get in there and flow with the traffic. Does traffic sometimes stop at an entrance? Certainly. You get some big truck and trailer rig going through and you have to wait. Big deal. Merge in as soon as you can. I went through them every day I was in Germany and you don't see big backups because as soon as there's any kind of gap, people are moving to fill it. This business of Americans stopping before entering like it's a four-way stop is not only stupid, it's unsafe. Anyways, our country will need to get over itself and learn to drive them. They're the future and I like them. 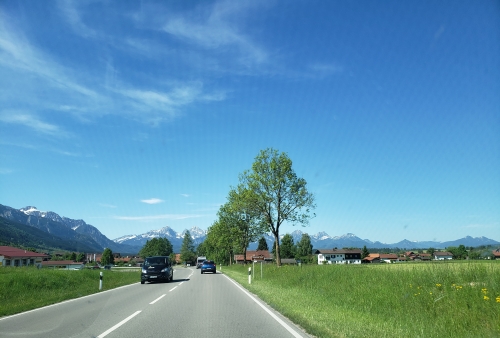 I'm not a fan of big cities and even though we were in Germany, that hasn't changed. Out in the country is where you really see Germany. The little towns and villages, farms, forests, and castles. All roads in Germany are more narrow than in the USA. They don't really believe in shoulders either. From the dotted line to the solid white line of the lane is about 10 feet compared to 12 foot lanes in North America. Here in the USA we usually have more pavement (2-3 feet), then some gravel of another couple feet. In Germany, that solid white line is on the edge of the asphalt. There's nothing after that except posts with reflectors on them. So not only is the road more narrow, it feels even smaller because of the lack of shoulder. Speed limits are usually 70 (43.4 mph) to 100 (62 mph). You get use to it after awhile. I'm not saying it's better, but it's not horrible. Another thing about rural driving is that when you come to a "T" there is often not a stop sign, but a caution. Meaning if there's no traffic, just go. You don't have to stop first. Very nice. The countryside is just beautiful and we were there during haying season so not one day went by where we didn't pass a tractor on the road. It became a game. "When will we see our tractor today?" 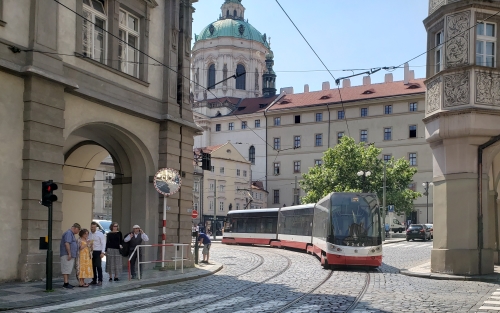 City Driving
So here's where it got interesting for me. Picture the same narrow roads except now add buildings that go right down to the street with a small sidewalk in front of it. Cobblestone roadways too. Driving in the older cities could probably feel a bit claustrophobic for some. No right turn on red. That's one thing I read about before traveling over there so I was ready for that. But you really have to watch what you're doing. One dumb thing they do over there (really, the only one that stood out) is that they place their traffic lights at the front of the intersection where you're stopped, not across the intersection where you can see them better. You can find yourself stopped and having to crane your head up to see the light nearly on top of your car. Many times there's one to the side, but if there are two lanes going that way and a truck is beside you, you have to look up. Of course the other thing you have over there is many different modes of transportation. It can be ... busy. We were in Leipzig and ended up in the university district so in one place we had 200-300 bicyclists, pedestrians, cars, scooters, motorcycles, and trams. The ones on rails like a train. That was the moment I was thinking "get me out of here so I can park this car!" We survived and no one was run over.

I have a lot of stories, but they're small little events. Nothing huge, but little moments of joy being with people, seeing new things, seeing really old things, and just enjoying life. I'd be sitting in a city square, eating lunch with Vicki and Amy, trying to soak in that I'm sitting in a city that is way older than my country. I'd love to go back and I'm more or less planning to do so at some point. But I want two things to be different. One, I want to learn German before I return. It bothered me more than I thought it would that I couldn't speak the language. Yes there are plenty that speak English especially in the larger cities, but I don't want to depend on that. Call it an American sense of independence in me. Second - I want to bring my riding gear and rent a motorcycle. Man, the country roads are all curvy, twisty, and smooth. I saw lots of people riding and it really made me jealous. I'm pretty sure if I posted to my fellow Triumph riders in Germany that I was coming over I'd have my pick of meet-ups.

People have told me for years how much they enjoyed traveling to different parts of the world and now I can say that I've done that and I get why people say it. Traveling can give you a sense of perspective on your own home. It can help you appreciate what you have and see how things could be better. No one place or people have a lock on how to do things best. We can learn from others and be stronger for it. Get out there and see things!